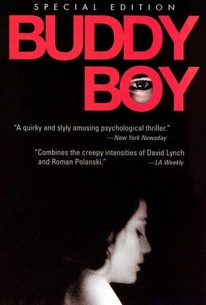 In this bizarre drama that would seem to have "cult item" written all over it, Francis (Aidan Gillen) is a severely introverted young man with a speech impediment who shares a shabby apartment with his bedridden mother, Sal (Susan Tyrrell). Francis has developed certain voyeuristic tendencies which are satisfied through his job in a photo lab, where he helps process other people's snapshots all day. Soon Sal has a new boarder, a massive plumber named Vic (Mark Boone Junior), and Francis notices that a beautiful woman has moved in across the street -- who, to his delight, never draws her curtains. One day, while walking home, Francis sees the woman being attacked by a mugger, and he's able to rescue her. The grateful woman introduces herself as Gloria (Emmanuelle Seigner) and begins flirting with Francis; the evening ends with Francis in Gloria's bed, hardly able to believe his good fortune. However, he can't help watching her from across the street, and when the staunchly vegetarian Gloria is gobbling down some meat, he begins to suspect that not everything is what it seems to be, leading him into a labyrinth of violence and murder. The score was composed by Michael Brook, with contributions from Brian Eno.

Joyce Guy
as Another Woman

Ray Miceli
as The Arguing Man

Linda Manz
as (uncredited)
View All

There are no featured audience reviews for Buddy Boy at this time.