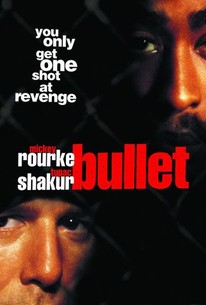 Seven years after his comedy Earth Girls Are Easy (1988), former music video director Julien Temple returned to feature films with the direct-to-video crime melodrama Bullet (1995), which featured a fine supporting cast. Mickey Rourke stars as Butch "Bullet" Stein, a Jewish junkie from the mean streets of Brooklyn who is paroled after eight years in prison. Butch rips off a runner for local drug dealer, Tank (Tupac Shakur), and is soon right back into his old habits of snorting coke and shooting up heroin with his best friend Lester (John Enos III). Enraged by Butch's affront and already determined to get revenge on him for a past wrong, Tank sets about getting even with his old enemy by hiring a hulking brute, Gates (Ray Mancini) to beat Butch. When the confrontation occurs, however, Gates breaks his hand on the battle-hardened Butch. Besides Lester, the only people in Butch's corner are his two brothers, the mentally-unhinged Vietnam War veteran Louis (Ted Levine) and aspiring artist Ruby (Adrien Brody), neither of whom can be counted on to help him in the inevitable showdown.

Fatmir Haskaj
as Jamie, Punk No. 1

Joseph Dain
as Brian, Punk No. 2

Mick O'Rourke
as Joey, Thief No. 1

Joseph A. Rourke
as Danny, Thief No. 2