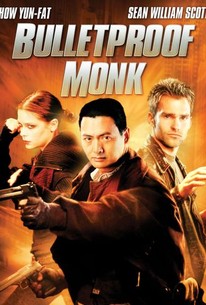 Venerable action star Chow Yun-Fat is the only saving grace in this silly action flick that more often than not resembles a commercial in style.

A monk and a pickpocket become unlikely allies in this action adventure story. Sixty years ago, a nameless monk (Chow Yun-Fat) was appointed the guardian of a mysterious scroll that grants remarkable powers to those who possess it. After six decades of traveling the world to protect the scroll, the monk must find someone new to assume the responsibility, but as fate would have it, the new caretaker turns out to be Kar (Seann William Scott), a scruffy and distinctly non-enlightened petty thief living in San Francisco. As the monk attempts to educate Kar in the powers and responsibilities of the scroll and the ways of a monk's life, they discover they have a rival for the possession of the valuable scroll. As Kar and the monk fend off their mysterious adversary, they are aided by Bad Girl (Jaime King), a beautiful Russian mob affiliate with amazing martial arts skills and a vested interest in keeping the scroll in virtuous hands. Bulletproof Monk was based a comic book series published in 1999; Chow Yun-Fat's frequent collaborators John Woo and Terence Chang produced.

Yun-Fat Chow
as Monk with No Name