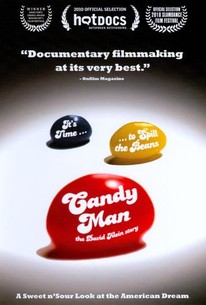 In 1976, David Klein was a candy distributor who had a brainstorm -- make the world's best jelly beans, and create a store just to sell them. Klein came up with new recipes for jellybeans that used natural ingredients and flavored the inside filling as well as the shells. Several years later, Klein's Jelly Belly jelly beans were on the market, and while business was slow at first with a little press attention and an unpaid celebrity endorsement from then-president Ronald Reagan, the gourmet jelly beans became a massive success. However, while Klein was a great candy maker, he wasn't much of a businessman; he was pressured into selling the Jelly Belly trademark to the company that manufactured the candy just as the product was taking off nationally, and not only was he cut out of most of the profits, he's been written out of the company's history, with no mention on their website of the man who created their signature product. Filmmaker Costa Botes profiles David Klein and tells the strange story of how the man behind one of the greatest success stories in the sweets industry lost control of his brainchild in the documentary Candyman. Produced by David Klein's son Bert Klein, a successful filmmaker and animator, Candyman was an official selection at the 2010 Slamdance Film Festival.