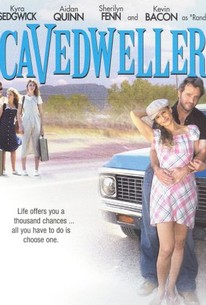 Cavedweller is an adaptation of Dorothy Allison's novel of the same name. Anne Meredith, who also adapted Allison's Bastard Out of Carolina, wrote the script, and the film was directed by Lisa Cholodenko (Laurel Canyon). Kyra Sedgwick stars as Delia Byrd. As the film opens, Delia loses her wayward rock-star husband, Randall (Kevin Bacon in a bit part), to a car accident, and decides to take her angry, heartbroken young daughter, Cissy (Regan Arnold, who played the tormented little sister in Blue Car), from Los Angeles back to her hometown in rural Georgia, where Delia left her two daughters and her abusive husband, Clint (Aidan Quinn), many years ago, to join Randall on the road. "Those people are not gonna be happy to see you," warns Delia's friend, Rosemary (singer Jill Scott in her film debut), but Delia is determined to reclaim her daughters. Cissy irrationally blames Delia for Randall's death, making the drive to Georgia an unpleasant one. Upon arriving there, Delia finds that she is not remembered fondly. Her taciturn grandfather (Myron Natwick) reluctantly takes her and Cissy in, but Delia soon learns that Clint is dying, and that her daughters, Amanda (Vanessa Zima) and Dede (April Mullen), are living with Clint's fire-and-brimstone mother (Jackie Burroughs), who has no intention of letting the girls see her. Realizing he has wronged her, Clint agrees to help Delia get custody of the girls, in exchange for her caring for him until he dies. Cavedweller was shown at the 2004 Tribeca Film Festival before premiering on Showtime.

There are no featured audience reviews for Cavedweller at this time.