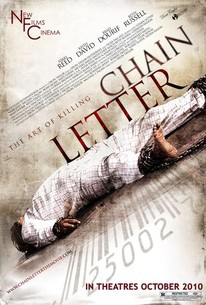 When high school senior Jessie Campbell (Nikki Reed) and her tight-knit group of friends begin to receive a series of foreboding email chain letters, they have no idea the terror that awaits them. With a warning that if they break the chain, they will lose a life, the seemingly harmless email turns deadly when one-by-one the friends that do not forward the chain letter are hunted down and gruesomely killed by horror's newest villain, the Chain Man. A terrifying horror film that will leave audiences wondering if modern technology is really as safe as we think it is, CHAIN LETTER was directed by Deon Taylor and written by Taylor and Michael J. Pagan. The film stars Nikki Reed (Twilight, New Moon, Thirteen), Michael J. Pagan (How Stella Got Her Groove Back, Nite Tales), Noah Segan (Deadgirl), Matt Cohen (Boogeyman 2), Cody Kasch (Desperate Housewives), Betsy Russell (Saw III, Saw IV), Cherilyn Wilson (90210), Brad Dourif (Alien, One Flew Over the Cuckoo's Nest), Keith David (Crash, Barbershop), with Michael Bailey Smith (The Hills Have Eyes) as the killer.-- (C) New Films International

Ivan Gonzalez
as Winston
View All