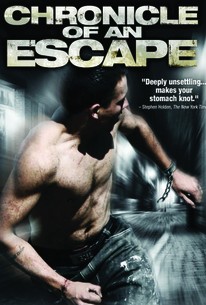 Chronicle of an Escape

Chronicle of an Escape Photos

The true story of four men who narrowly escaped death at the hands of Argentina's military death squads during the 1970s is brought to the screen in this thriller. In 1977, Claudio Tamburrini (Rodrigo de la Serna) was a goalie for a minor-league football team when he was abducted by members of the Argentine military police and taken to an unofficial detention center on the false suspicion that he was a terrorist. Over 30,000 people lost their lives at the hands of Argentinean authorities under the military junta that ruled the country between 1976 and 1983, and as he was tortured by intelligence agents looking for information he didn't have, Tamburrini fully expected to become another victim. After many sessions of brutal torture, Tamburrini and his fellow captives Guillermo (Nazareno Casero) and Tano (Martin Urruty) were being readied for execution when, in a final desperate act, Tamburrini dove out a window during a rainstorm. Guillermo, Tano, and another man followed, and the four, naked and with noting but their wits, began a desperate run to freedom. A major box-office success in Argentina, Crónica de una Fuga (aka Chronicle of an Escape and Buenos Aires, 1977) received its North American premier at the 2006 Toronto Film Festival.

Daniel Valenzuela
as German
View All

News & Interviews for Chronicle of an Escape

Critical Consensus: Awake Not Screened For Critics
CANNES: So, When Can I See These Movies?
View All

Critic Reviews for Chronicle of an Escape

Audience Reviews for Chronicle of an Escape

Chronicle of an Escape Quotes