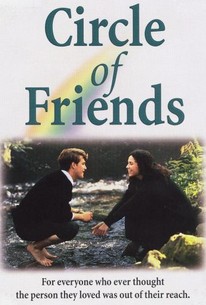 Set in 1957, this romantic coming-of-age story follows three childhood friends from a small town in Ireland as they head to Dublin to attend Trinity College. Nan (Saffron Burrows), a year older than her friends and already in her second year at Trinity, is ambitious, romantic, and just a bit reckless. She hopes to win the hand of Simon (Colin Firth), an older Protestant land-owner who would help her rise up the social and economic ladder. Eve (Geraldine O'Rawe), a bit more pragmatic and cautious, finds herself falling for a boy named Aidan (Aidan Gillen). Bernadette (Minnie Driver), called "Benny" by her friends and family, comes from strict parents who won't allow her to live on campus, forcing her to commute back and forth from classes every day. Bennie's father, a haberdasher, has always expected that his daughter, a bit plainer and plumper than her friends, will marry his shop's manager, an odd duck named Sean (Alan Cumming). But at Trinity, Bennie discovers that she fancies a tall, good-looking rugby player named Jack (Chris O'Donnell), and to the surprise of Bennie and everyone else, it turns out that Jack fancies her as well. Circle of Friends gave Minnie Driver her breakthrough film role after her initial success as a television actress in Britain.

Brendan Conroy
as Priest
View All

Critic Reviews for Circle of Friends

Audience Reviews for Circle of Friends