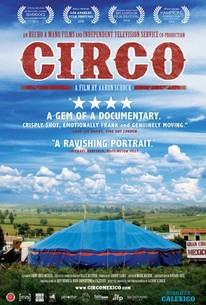 Aaron Schock's acclaimed film, which has appeared at many world festivals and is the most recent winner of the Jury Award at the Hampton's International Film Festival, is one of the most compelling documentaries seen in years. Set in the cinematically rich milieu of a century-old traveling circus in rural Mexico, CIRCO follows the family-run "Circo Mexico" as they struggle to stay together despite mounting debt, dwindling audiences, and a simmering family conflict. The hardscrabble founders, the Ponce family, have lived and performed on the back roads of Mexico since the 19th century. Tino, the ringmaster, is driven by his dream to lead his parents' circus to greater success. He corrals the energy of his whole family, including his parents, his brother and his four young children, towards this singular goal. But his wife Ivonne is determined to make a change. Feeling exploited by her in-laws, she longs to return her kids to a childhood lost to laboring in the circus. Through an intricately woven story of a marriage in trouble and of a century-old family tradition that hangs in the balance, CIRCO asks: To whom and to what should we ultimately owe our allegiances? Gorgeously filmed along the back roads of rural Mexico, CIRCO is a road movie that opens the viewer to the luminous world of a traveling circus while examining the universal themes of family bonds, filial responsibility, and the weight of cultural inheritance. --(c)First Run Features