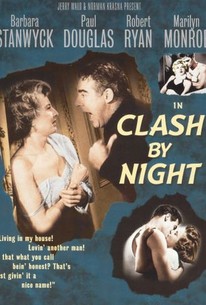 Adapted from a play by Clifford Odets, Clash by Night is a pretentious but well-staged "kitchen sink" drama involving love and lust in a tiny fishing village. Desperate for security and happiness, Barbara Stanwyck enters into a loveless marriage with cloddish but likeable fisherman Paul Douglas. Douglas' best pal is local movie projectionist Robert Ryan, who makes a beeline for Stanwyck. She entertains thoughts of leaving Douglas, but is dissuaded by her knowledge of his volatile temper. Given the film's title, a "clash by night" is inevitable, but the results aren't as horrible as Stanwyck imagined. Counterpointing the film's main triangle is a subplot involving the tempestuous romance between Keith Andes and Marilyn Monroe, the latter playing a naive but sexy young girl who yearns for the sort of adventure that the "worldly" Stanwyck has supposedly experienced in her life. Clash by Night was directed by the mercurial Fritz Lang, who enjoyed working with the ever-professional Stanwyck but had the devil's own time coaxing a believable performance out of Monroe (though he certainly succeeded).

Tony Dante
as Fisherman at Pier

Bill Slack
as Customer
View All

Critic Reviews for Clash by Night

Audience Reviews for Clash by Night