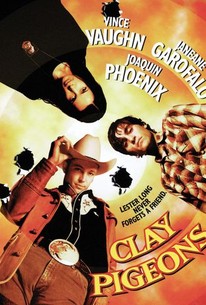 David Dobkin made his feature directorial debut with this comedy thriller about an ordinary guy mistakenly viewed as a serial killer by the FBI. In small-town Mercer, Montana (population 1,536), easy-going gas station attendant Clay Bidwell (Joaquin Phoenix) endures a comical nightmare that gets underway when Clay's best buddy Earl (Gregory Sporleder) learns Clay slept with Earl's wife Amanda (Georgina Cates). Earl commits suicide as a horrified Clay watches. Amanda would rather see Clay in prison than have the local gossipers chatting about their affair, so to cover-up, Clay puts Earl's body into a faked auto accident. Clay then finds comfort with waitress Gloria (Nikki Arlyn), but Amanda kills Gloria, leaving Clay to dispose of another body. At the local bar, Clay is befriended by trucker Lester Long (Vince Vaughn), and they go fishing, hooking a corpse. Lester asks Clay to tell the cops he found it alone. The next victim is Amanda, stabbed 40 times. Clay tries to explain what's going on to the law -- Sheriff Mooney (Scott Wilson) and FBI agents Dale Shelby (Janeane Garofalo) and Reynard (Phil Morris) -- but he becomes the main suspect and is arrested, while serial killer Lester is on the loose. Clay manages an escape from jail and goes in search of Lester. David Dobkin, a Ridley Scott protégé, is an award-winning director of music videos (including the Coolio clips that won MTV's "Best Dance Video of 1996") and commercials, many helmed under the auspices of Ridley and Tony Scott's production companies. Shown at the 1998 Toronto Film Festival.

Kevin Rahm
as Bystander at Amanda's

Vince Vaughn’s 10 Best Movies
Watch An Uncut Trap Scene From "Saw III," If You Dare
"Crashers" Director to Battle the Undead
View All