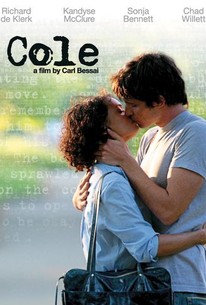 A young man has to choose if his loyalties lie with his family or the woman he loves in this independent drama. Cole (Richard de Klerk) was born and lives in a small town in British Columbia, where he helps his sister Maybelline (Sonja Bennett) run the local gas station and looks after his mother (Rebecca Jenkins), who is slipping into senility. Cole also keeps an eye on Bobby (Chad Willett), Maybelline's live-in boyfriend who has a vicious streak and sometimes beats both her and Rocket (Jack Forrester), her young son fathered by a previous boyfriend. While Cole has plenty of drama to deal with at home, he dreams of becoming a writer, and he decides to hone his craft by enrolling in a college three hours away. In one of Cole's writing classes, he meets Serafina (Kandyse McClure), who is everything Cole isn't -- confident, wealthy and casually beautiful. Also unlike Cole, Serafina is black, but that doesn't dull the mutual attraction between them. But as much as Cole cares for Serafina, he's not sure if there's a place for her in his old hometown, and he's torn between his desire to start a new life in the city and his need to take care of his family and protect his sister and nephew. Cole was an official selection at the 2009 Toronto International Film Festival.

There are no critic reviews yet for Cole. Keep checking Rotten Tomatoes for updates!