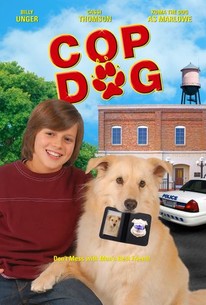 After his policeman father is killed in the line of duty, troubled teen Robby (Billy Unger) strikes up a friendship with the loyal police dog who once patrolled the streets with his dearly departed dad in this canine comedy for the entire family. Robby become bitter and withdrawn following the death of his father. But that all started to chance once Robby met Marlowe, his father's furry, four-legged partner. Before long Robby and Marlowe are best friends. Then tragedy strikes when Marlowe is hit by a car while chasing a pair of crooks. Just as Robby starts to think his life can't get any worse, the impossible happens and Marlowe returns. Now Robby is the only one who can see Marlowe, and with a little help from Robby's best friend Deb (Cassi Thompson), the boy and his ghost dog set out to catch the criminal who killed Robby's father. ~ Jason Buchanan, Rovi

Kuma the Dog
as Marlowe

Nick Holmes
as Joe
View All

There are no critic reviews yet for Cop Dog (Marlowe). Keep checking Rotten Tomatoes for updates!

There are no featured audience reviews for Cop Dog (Marlowe) at this time.