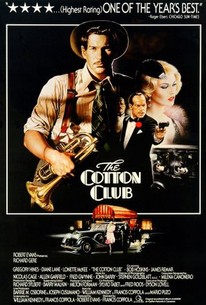 Energetic and brimming with memorable performers, The Cotton Club entertains with its visual and musical pizazz even as its plot only garners polite applause.

There are those who insist that the backstage intrigues which occurred during the production of Cotton Club would make a better film than Cotton Club itself. Essentially, this "dream" project of director Francis Ford Coppola was intended to reflect the passing parade of New York in the 1930s, using Harlem's famed Cotton Club nitery as a metaphor of the era. After innumerable in-progress script changes were made and countless post-production "improvements" were imposed, what emerged was a crazy quilt of varying styles, divergent acting techniques and stop-and-start plotlines. Occasionally, Cotton Club is well up to the standards established by Coppola in his earlier, more successful films. The central character, loosely based on George Raft and played by Richard Gere, is a jazz cornet player at the Cotton Club. Gere saves the life of gangster Dutch Schultz (James Remar), who in gratitude takes Gere under his wing, engaging the young man's services as escort for Schultz's girl friend Diane Lane (guess where this leads?) Meanwhile, Gere's overambitious hoodlum brother Nicolas Cage (playing a character inspired by mobster Mad Dog Coll) kills two innocent children during a mob hit and is forced to go into hiding. Cage holds gangster Frenchy Demarge (Fred Gwynne) as a hostage, but Demarge's safety is negotiated by Owney Madden (Bob Hoskins), the mob owner of the Cotton Club (the touching friendship between Demarge and Madden is one of the few subplots to remain intact in the film's release version). Cage is killed, followed in death shortly afterward by Schultz, who is put "on the spot" by Lucky Luciano (Joe Dallesandro). Gere wins a Hollywood movie contract and heads off to Tinseltown with Diane Lane. These plot convolutions tend to diminish the importance of the black characters who work as Cotton Club entertainers. The intriguing fact that blacks were permitted to perform at the club but were denied access as patrons should have been given as much emphasis as Richard Gere's story; instead, we are left with tantalizingly brief snatches of a romance between Gregory Hines and Lonette McKee, and a few scattered musical numbers involving Hines, his brother Maurice, Charles "Honi" Coles, and a staggeringly good Cab Calloway imitator (Larry T. Marshall). Cotton Club tends to leave the viewer feeling as though several vital ingredients are missing from the recipe, but there is still a lot left over to please the ear and eye.

Christopher Lewis
as Child in Street

Critic Reviews for The Cotton Club

Audience Reviews for The Cotton Club