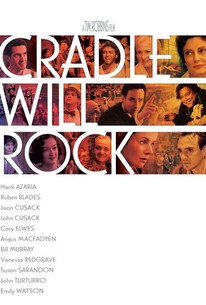 The art and theater world of 1930s New York City is the backdrop for the new Touchstone Pictures film "Cradle Will Rock." As labor strikes break out throughout the country, New York City is alive with a burgeoning cultural revolution. "Cradle Will Rock" is a tapestry of interwoven stories: Nelson Rockefeller commissions Mexican artist Diego Rivera to paint the lobby of Rockefeller Center, while Italian propagandist Margherita Sarfatti sells Da Vincis to millionaires to fund the Mussolini war effort. A paranoid ventriloquist tries to rid his vaudeville troupe of communists, and a 22-year-old Orson Welles directs his Federal Theater group in an infamous stage production of "The Cradle Will Rock," closed down on the eve of its opening by U.S. soldiers. Based on true events, "Cradle Will Rock" relives an exciting and dangerous time in American history, when individual courage prevailed censorship, and artists risked their livelihood by continuing to perform and paint according to conscience.

Daniel Jenkins
as Will Geer

Robert Ari
as Liberty Committee No. 1

Michele Pawk
as Liberty Committee No. 2

Boris McGiver
as Man on Street

Leonardo Cimino
as Man in Line

Mary Robbins
as Disgruntled Worker No. 1

Chris Talbott
as Disgruntled Worker No. 2

Susan Bruce
as Disgruntled Worker No. 3

Ian Bagg
as Disgruntled Worker No. 4
View All

Critic Reviews for Cradle Will Rock

Audience Reviews for Cradle Will Rock