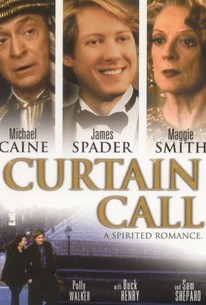 In this romantic comedy with supernatural touches, Stevenson Lowe (James Spader) works for a large publishing house, editing and acquiring new projects. Lowe's new boss is after him to buy fewer books that are good and more books that will sell, while his girlfriend Julia (Polly Walker) is trying to convince him that marriage might not be such a bad idea. But marriage is a tough sell for Lowe; in the hopes that a new home might make him think about settling down, Julia suggests that Lowe look at a brownstone that's just gone on the market. Lowe likes the place and buys it, without deciding if Julia should join him. However, Lowe quickly discovers that he's not actually alone in his new digs; the ghosts of Max Gale (Michael Caine) and Lily Marlowe (Maggie Smith), an acting couple who were the toast of the legitimate stage many years ago, are already in residence. Max and Lily are soon offering Lowe all sorts of unsolicited advice on winning the heart of his lady love, though given how much they bicker, they may not be the best people from whom to learn the art of romance. Buck Henry, Sam Shepard, Frank Whaley, and Marcia Gay Harden highlight the supporting cast.

Sam Shepard
as Will Dodge

Jack Stephens
as Writer in Bookstore
View All

There are no critic reviews yet for Curtain Call. Keep checking Rotten Tomatoes for updates!

There are no featured audience reviews for Curtain Call at this time.