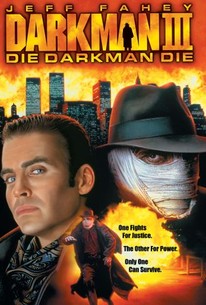 Dr. Westlake/Darkman (Arnold Vosloo) is up to his old tricks, stealing from the bad and keeping for himself while still trying to perfect his synthetic skin which only lasts 99 minutes in the light. After stealing from industrialist and mobster/drug dealer Peter Rooker (Jeff Fahey), Westlake is approached by Dr. Bridget Thorne (Darlanne Fluegel) who is engaged to perform an operation to relieve his pain, but instead she implants in his brain a special device that enables his enemies to control him by inducing unbearable pain. With the help of double-crossing Dr. Thorne, Rooker wants to create a new drug based on Darkman's research. But Darkman strikes back by infiltrating Rooker's gang and his life. Darkman even starts to feel drawn to Rooker's wife Angela (Roxann Biggs-Dawson) and her daughter, who are neglected by the real Rooker. But in disguise, Darkman is able to cling to a normal life, posing as a family man. Even though this sequel was filmed before Darkman II: The Return of Durant, it was ultimately decided that it should be bumped back to part three. This direct-to-video sequel is however, in many ways, superior to the first sequel. Fahey makes an excellent villain combining the best of what made Larry Drake and Colin Friels so enjoyable in the original. Vosloo still can't capture the essence and power of Liam Neeson's character portrayal, but he does a good enough job. Fans of the saga will go feverish over this sequel and others with find it fun as well.

Diana Platts
as Reporter No. 1

Joanna Reece
as Reporter No. 2

Christopher Bondy
as Gibson
View All