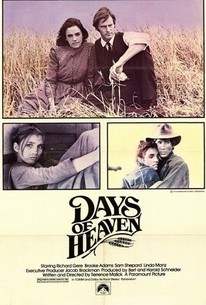 Illuminated by magic hour glow and wistful performances, Days of Heaven is a visual masterpiece that finds eloquent poetry in its spare scenario.

Terrence Malick's Days of Heaven, the long-awaited follow-up to his 1973 debut Badlands, confirmed his reputation as a visual poet and narrative iconoclast with a story of love and murder told through the jaded voice of a child and expressive images of nature. In 1916, Chicago steelworker Bill (Richard Gere, stepping in for John Travolta) flees to Texas with his little sister Linda (Linda Manz) and girlfriend Abby (Brooke Adams) after fatally erupting at his boss. Along with other itinerant laborers, they work the harvest at a wealthy, ailing farmer's ranch, but the farmer (playwright Sam Shepard) falls in love with Abby, and, believing her to be Bill's sister, asks the three to stay on at his elysian spread. Seeing it as his one real chance to escape perpetual poverty, Bill urges Abby to marry the sick man. Marriage, however, has more restorative powers, and the farmer has more magnetism, than Bill had planned. "Nobody's perfect," Linda impassively observes in one of her many voiceovers, after their brief paradise is erased by plagues of locusts, fire, and lethal jealousy. ~ Lucia Bozzola, Rovi

Sam Shepard
as The Farmer

News & Interviews for Days of Heaven

Critic Reviews for Days of Heaven

Audience Reviews for Days of Heaven