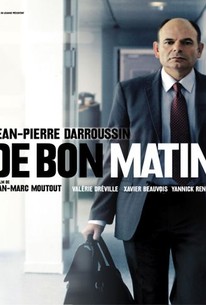 Filmmaker Jean-Marc Moutout explores the many small incidents that led to one shocking act of violence in this drama inspired by actual events. Paul Wertret (Jean-Pierre Darroussin) works at a large commercial bank, and arrives at the office one morning with a surprise -- he has a loaded gun in his briefcase, and calmly murders two of his colleagues in cold blood. As Paul waits for the police to arrive after the shooting, we see in flashback some of the events that prompted his sudden collapse: a number of betrayals by his boss Alain Fisher (Xavier Beauvois), who has used Paul's work to get ahead; how Fabrice Van Listeich (Yannick Renier) made Paul complicit in the firing of a close friend; many days and nights of long hours with little to show for his loyalty; a failing relationship with his wife Francoise (Valerie Dreville); and the ways the world financial crisis has made an unscrupulous business all the more corrupt. De Bon Matin (aka Early One Morning) was an official selection at the 2011 London Film Festival.

Ralph Amoussou
as Youssef
View All

There are no critic reviews yet for De Bon Matin. Keep checking Rotten Tomatoes for updates!

There are no featured audience reviews for De Bon Matin at this time.