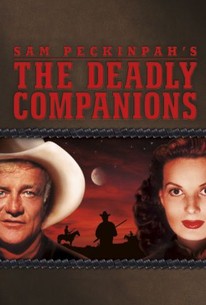 Sam Peckinpah's first feature as director is this modest Western, taking place in the late 1860s. Yellowleg (Brian Keith), a former sergeant in the Union army, is obsessed with tracking down Turk (Chill Wills), a Rebel army deserter who, during the War Between the States, tried to scalp him as he lay wounded on a battlefield. Yellowleg finds Turk and his sidekick Billy (Steve Cochran) in a cantina and convinces them to help him rob a bank. They journey to Gila City, where the bank is located, and find that another group of bank robbers are also in Gila City to rob the same bank. During a shoot-out with the other bank robbers, Yellowleg accidentally kills the nine-year-old son of dance-hall hostess Kit Tilden (Maureen O'Hara). Remorseful at having caused the death of Kit's son, Yellowleg forces Turk and Billy to accompany him through Apache territory to bury Kit's son at the gravesite of her husband in the ghost town of Siringo. When Billy attacks Kit, Yellowleg throws him out of their camp. Then Turk deserts. As Kit and Yellowleg finally reach Siringo, Yellowleg realizes that he is in love with her. But then, Billy and Turk reappear, having robbed the bank in Gila City, leading to a final confrontation between Yellowleg and Turk.

Will Wright
as Doctor