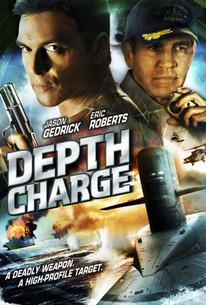 Jason Gedrick and Eric Roberts lead the cast of this thriller about a submarine captain who attempts to hold Washington, D.C. hostage for a billion dollars, and the heroic doctor who struggles to thwart the plan before the situation escalates. On the eve of his retirement Captain Kreig (Roberts) stages a coup d'etat on his ship, the nuclear powered USS Montana, and threatens to lob an ICBM at Washington, D.C. unless the White House pays out a ransom of one billion dollars; little did Captain Kreig realize that not every sailor aboard the USS Montana was willing to go along with the plan. Enter Doc (Gedrick), the submarine's outwardly docile medical specialist. Doc realizes that unless someone aboard the ship manages to diffuse the situation, chances are good that the president (Barry Bostwick) will likely declare it - and everyone aboard - expendable. Now, as the president ponders the prospect of ordering the USS Montana destroyed, it's up to Doc and James Piersall (Chris Warren, Jr.) to take back the ship or die trying.

Stephen Taylor
as Bachman
View All

There are no critic reviews yet for Depth Charge. Keep checking Rotten Tomatoes for updates!

There are no featured audience reviews for Depth Charge at this time.