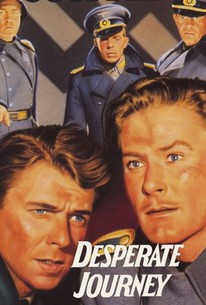 Errol Flynn are the on-screen spark plugs in this bracing propaganda yarn, which relies on the personalities of its casts as well as the lively direction of Raoul Walsh to overcome the improbabilities of its plot. In 1942, a lone RAF bomber flying deep into Germany (just inside the old Polish border) is shot down after completing its mission. The skipper is killed, and left in command is Flight Lieutenant Terry Forbes (Errol Flynn), an Australian who plans on leaving damage behind on the ground so the Germans remember him, even if he doesn't make it back to England. The rest of the crew consists of brash American bombardier Johnny Hammond (Ronald Reagan), bookish Canadian navigator Jed Forrest (Arthur Kennedy), wide-eyed Flight Sergeant Lloyd Hollis (Ronald Sinclair), the son of a World War I hero, and First World War veteran Kirk Edwards (Alan Hale, Sr.). They're captured in short order, and brought before Luftwaffe Major Otto Baumeister (Raymond Massey) for interrogation -- they not only manage to escape, but gather some information vital to the Allied war effort. Now they only have to figure out how to cross most of Germany and Holland, avoiding capture along the way by a mix of sheer daring, blind luck, and assistance from two anti-Nazi Germans (Nancy Coleman, Albert Bassermann) -- and just when it seems that all of the odds have turned against them, they find themselves faced with a German plot to wipe out a major part of London, and one last opportunity to get home.