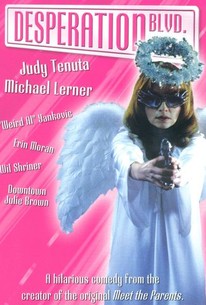 In this off-the-wall comedy, Joan Sweeney (Judy Tenuta) is an actress who unfortunately hit the peak of her career at the age of eight. As a child performer, she was the star of a successful television series, but as a grown-up, she can't get work to save her life. Tired of dressing up as a child for personal appearances, Joan has decided she needs publicity to put her career back on track, and she's thoroughly convinced there's no such thing as bad press. Consequently, Joan poses as a homeless person, knocks over a convenience store, and even openly declares herself as lesbian in the interest of greater press coverage, all with no luck. Fate appears to be smiling on her, but at just the wrong time, when Joan finally gets offered a role that could kick start her career just as she discovers she's pregnant. Desperation Boulevard also stars Michael Lerner and Weird Al Yankovic; one-time TV stars Erin Moran, Burt Ward, and Ken Osmond also appear in cameo roles.

Weird Al Yankovic
as himself

Erin Moran
as Herself

Dana Plato
as Herself

Ken Osmond
as Himself

Burt Ward
as Himself

Rhonda Shear
as Herself

William B. Jenkins Jr.
as Coco the Clown

Greg Glienna
as Director at Audition

Ken Kleiber
as Guy, the Waiter

There are no critic reviews yet for Desperation Boulevard. Keep checking Rotten Tomatoes for updates!

There are no featured audience reviews for Desperation Boulevard at this time.