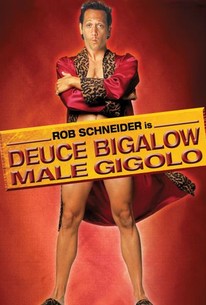 According to critics, Deuce Bigalow is just too dumb and filled with old, tired gags.

Yet another Saturday Night Live alumnus makes his bid for big-screen success as Rob Schneider, best remembered as the "Making copies!" guy, tackles his first leading role in this broad comedy. Deuce (Rob Schneider) earns a meager living as a professional fish tank cleaner until he's asked to housesit for a gigolo. Deuce mistakenly answers the gigolo's business phone and finds himself having sex with a woman he's never met and getting paid for it (not a bad deal, since women generally avoid Deuce like the Ebola virus). It's not long before Deuce learns that there's more to selling your body than one might expect: for example, being re-styled by your pimp or having to explain your new source of income when the owner of the house gets home. Deuce Bigalow: Male Gigolo was the first feature film produced by Adam Sandler's production company, Happy Madison; Sandler himself makes a cameo appearance, while Oded Fehr, William Forsythe, Eddie Griffin, and Marlo Thomas highlight the supporting cast.

Torsten Voges
as Tina the Giant

Shain Holden
as Waiter At Pool

Charlie Curtis
as Half Dressed Girl

Jackie Titone
as Sally
View All