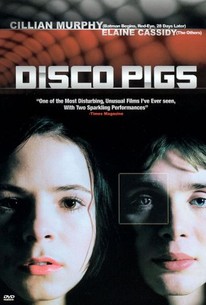 A friendship between two young people grows into a dangerous obsession in this drama based on the acclaimed stage play by Enda Walsh. Darren (Cillian Murphy) and Sinead (Elaine Cassidy) were born moments apart in the same hospital in a small Irish community. Nicknamed "Pig" and "Runt," Darren and Sinead grew up next door to each other and became inseparable friends while they were still toddlers; at the age of 16, their bond is even stronger than ever. However, Darren and Sinead also have a fondness for making trouble, and over the years Darren has developed a taste for violence; one of his favorite pranks is to have Sinead flirt with a man at the local disco, and then storm up, posing as her jealous boyfriend, and start a fight. Several people in town feel there's something not entirely healthy about Darren and Sinead's relationship, and Sinead's parents are persuaded to send her away to a school in the northern part of Ireland. Darren's attachment to Sinead grows only more intense in her absence, and in time he runs away to find Sinead and bring her back, only to discover she's made a new best friend, Mags (Tara Lynne O'Neill). Disco Pigs was the first feature from Kirsten Sheridan, whose father is veteran filmmaker Jim Sheridan.