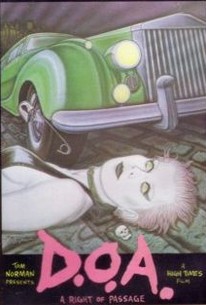 Though principally a documentary of the Sex Pistols' 1978 American tour (the only one they did with Sid Vicious), Lech Kowalski's early-'80s film D.O.A. also covers the early punk scene as a whole. There is much footage of other early (and mostly British) punk bands, filmed far away from the Pistols' American tour, and interviews with other figures associated with the early punk scene. The Sex Pistols are seen performing much of their classic early repertoire in clubs and concert halls throughout the South, as well as at their final show in San Francisco. Other influential bands seen in the film include the Clash, the Dead Boys, the Rich Kids (with ex-Sex Pistol Glen Matlock), X-Ray Spex, Generation X, and Sham 69. There is extensive interview footage with Sid Vicious and his girlfriend, Nancy Spungen, shortly before their violent deaths, and scenes from the short life of failed British pub punk band Terry and the Idiots. Also included are interviews with members of the audience at the Sex Pistols shows, illustrating how reaction to the group ran the gamut from enthusiasm to venomous disapproval.~ Richie Unterberger, All Movie Guide

There are no featured audience reviews for D.O.A. at this time.