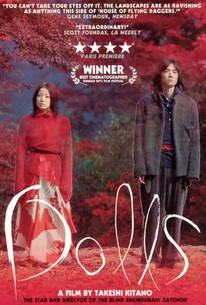 Master filmmaker Takeshi Kitano returns behind the camera for the first time since his indifferently received English-language effort Brother (2000) with this operatic tale of lost love. Dolls takes puppeteering as its overriding motif -- specifically, the kind practiced in Bunraku doll theater performances -- opening each section of his film with a story provided by the puppets and their masters, which relates thematically to the action provided by the live characters. Chief among those tales is the story of Matsumoto (Hidetoshi Nishijima) and Sawako (Miho Kanno), a young couple whose relationship is about to be broken apart by the former's parents, who have insisted their son take part in an arranged marriage to his boss' daughter. He initially agrees, causing the unstable Sawako to be committed to a psychiatric hospital. When he leaves his new bride at the altar to save Sawako, however, he realizes that she's so incapable of caring for herself that she needs to be tied to him with a red rope. Inextricably bound, the two wander through Japan, encountering others along the way who have similarly overlooked love for other, more fleeting pleasures: fame, power, money.

Tatsuya Mihashi
as Hiro, the Boss

Chieko Matsubara
as Ryoko, the Woman in the Park

Tsutomu Takeshige
as Nukui, the Fan

Yoshida
as Puppeteer of Chubei

Kazunari Aizawa
as The Young Minion

Moro Shioka
as Hitman in the Park

Shuhei Saga
as The Driver

Al Kitago
as Aoki, the Fan

Hawking Aoyama
as Son of the Boss's Brother

Sammy Moremore Jr.
as Friend of the Boss's Brother's Son
View All