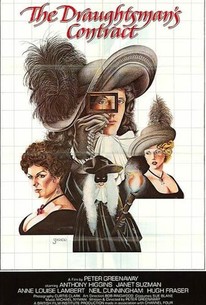 Smart and utterly original, The Draughtsman's Contract is a period piece that marks the further maturation of a writer-director with a thrillingly unique vision.

According to this story of a woman not so much scorned as ignored, life in late 17th-century England among the landed gentry was not what it appeared to be on the surface. Mrs. Herbert (Janet Suzman) is desperate to find a way to please her husband and win back his errant affections, and to that end, she coerces the draughtsman Neville (Anthony Higgins) into doing some drawings of the Herbert estate while her husband is away for a few weeks. She means to surprise her husband with the drawings, in the hope that he will be appropriately grateful. Neville does some coercing of his own, refusing to cooperate unless Mrs. Herbert bestows him with requested sexual favors -- she agrees, but is not happy about it. Mrs. Herbert's daughter (Ann Louise Lambert), in turn, seduces Neville -- her relationship with her husband Talman (Hugh Fraser) has become boring. Meanwhile, Talman has never liked Neville and the two of them have more than one witty altercation. Fortunately, Neville is leaving soon but when that day comes, Mr. Herbert's quite dead body is found floating in the water of the moat. Neville leaves anyway, though suspicion starts to center on him because people feel his drawings have something to do with Herbert's death. Unfortunately, Neville comes back to visit after some time has gone by, and the suspicions are anything but subsided as inhabitants of the manor begin to consider a course of action.

David Meyer
as The Poulena

Tony Meyer
as The Poulena

Michael Feast
as The statue

Critic Reviews for The Draughtsman's Contract

Audience Reviews for The Draughtsman's Contract