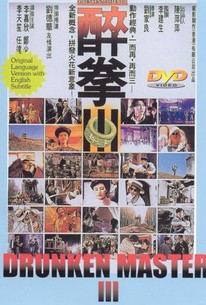 Hong Kong filmmaker Lau Kar-leung followed up the outstanding Drunken Master II by directing this mostly unrelated martial arts comedy which still manages to garner a few laughs despite its dubious reputation and the absence of Jackie Chan. In Chan's place is comedian Willie Chi as Wong Fei-hong, who is assigned -- along with his partner, Wong Kei-ying (Adam Cheng) -- to protect a Manchu princess named Sum Yu (Michelle Lee). Princess Yu is being hunted both by the malefic White Lotus Cult (actually run by white people in this spoof) and by nationalists loyal to Dr. Sun Yat-sen. Fei-hong receives additional help from a wine merchant, Uncle Yan (played by the film's director), who instructs him in special martial arts techniques. Unfortunately, the Manchu leaders fall in with the White Lotus Cult and relinquish Princess Yu to them to be ritually sacrificed, causing Fei-hong to undertake a daring rescue mission. Simon Yam appears as a gay villain aboard a bus, and the supporting cast also includes such familiar genre veterans as Andy Lau, Gordon Lau, and William Ho.

There are no critic reviews yet for Drunken Master III. Keep checking Rotten Tomatoes for updates!