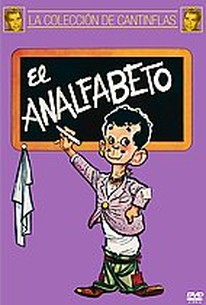 Popular Mexican comic Cantinflas made this his homecoming film after veering off to the U.S. to appear in Pepe, his last movie in English. El Analfabeto sees him back in top form as Inocencio Prieto y Calvo (which roughly translates as: Innocent, Dark-skinned and Bald). Inocencio loses his job just as he receives a letter telling him he has inherited $160,000 from the estate of his late uncle. But Inocencio cannot read. Along the way to learning how to read, the shy Inocencio acquires a charming love interest, Blanquita (Lilia Prado) and an enemy -- a bank teller who tries to nail him with a practical joke that goes wrong. The teller gets his hands on Inocencio's letter (which no one has ever read to him) and gives it to a corrupt lawyer with the thought of swindling the illiterate out of his money. As the plot thickens, Inocencio finds himself in more hot water before he finds his letter and ultimate happiness. ~ Eleanor Mannikka, Rovi

There are no critic reviews yet for El Analfabeto. Keep checking Rotten Tomatoes for updates!

There are no featured audience reviews for El Analfabeto at this time.