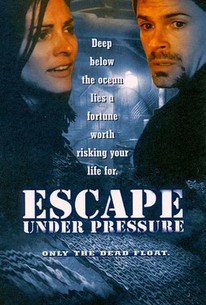 The discovery of a long-lost relic leads to danger on the high seas in this action-suspense drama. The Icon of Artemis, a rare and highly valuable religious artifact, is uncovered during an archeological dig. The Greek Government immediately lays claim to the piece, and it is soon placed aboard an ocean liner travelling to the Isle of Lesvos, where legend states the Icon belongs. However, an American billionaire, Elgin Bates (Craig Wasson), wants the piece for himself, and he will stop at nothing to get it. Bates hires a team of mercenaries, led by Hans Schuls (Harry Van Gorkum), to raid the ship, steal the Icon, and then sink the vessel once the artifact is safely aboard Bates' submarine. A heavily fortified company of Greek sailors and a representative of the U.S. Army Corps of Engineers, John Roman (Rob Lowe), put up a brave fight, and in the melee John and his wife, an American archeologist named Chloe (Larissa Miller), are caught in the middle. In the midst of the fighting, an explosion rips a hole in the side of the ship, and Chloe, who has rescued the Icon, is trapped with John in a watertight compartment below deck. As their oxygen runs low, Hans and his men offer to rescue them, but only on the condition that they turn over the Icon to Bates' thugs. Escape Under Pressure was first screened under the streamlined title Under Pressure.

Michael White
as Otto
View All

Critic Reviews for Escape Under Pressure

Audience Reviews for Escape Under Pressure

There are no featured audience reviews for Escape Under Pressure at this time.