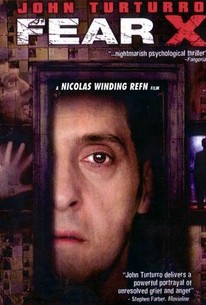 As hazy, unsettling, and fleetingly insubstantial as a dream, Fear X will lose many viewers in its ambiguities, but is partly propped up by strong work from John Turturro.

For his third (and first English-language) feature, Danish writer/director Nicolas Winding Refn collaborated with celebrated American author Hubert Selby Jr. (Last Exit to Brooklyn, Requiem for a Dream). John Turturro stars in the paranoid thriller as Harry, a Wisconsin mall security guard whose wife is murdered in a seemingly random double homicide at the mall. Harry is understandably obsessed with the crime, endlessly watching surveillance tapes in an effort to find the killer. He has a vision of his wife leading him into the house next door and decides to investigate. He breaks in and finds a photo of a woman standing in front of a Montana diner. Harry drives to Montana to track her down; she turns out to be Kate (Deborah Kara Unger), the wife of Peter (James Remar), the local sheriff, who is involved with a clandestine police organization. When Peter finds out that Harry has come into town asking questions about his wife, he decides to take action to protect his family. He agrees to meet Harry at his hotel. Fear X was shot by Stanley Kubrick collaborator Larry Smith. Brian Eno contributed to the score.

Jennifer Lynn Keef
as Department of Tourism Voice
View All