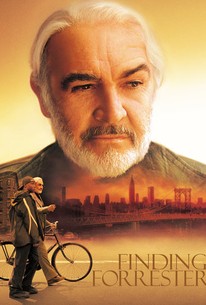 Despite the predictability of its plot and its similarity to Good Will Hunting, Finding Forrester has an honest, solid feel to it and good rapport between Connery and Brown.

2:10
Finding Forrester: Official Clip - Are You Challenging Me?

Four decades ago, William Forrester won a Pulitzer Prize for his classic novel. That was the last time the world heard of him. Now a recluse in Manhattan, his passion for literature is awakened by Jamal a 16-year old basketball player recruited by an elite Manhattan prep school for his brilliance both on and off the court. When Jamal sneaks into Forrester's apartment, he accidentally leaves behind his backpack, full of his precious writings. Finding these, Forrester is opened to a new world, one that gives him a reason to look past his prejudice and a reason to emerge from his self-imposed solitude. Forrester becomes his first fan and opens Jamal's eyes to a world of academia beyond the South Bronx apartment he shares with his adoring mother and brother. Though at times contentious, Forrester befriends Jamal and becomes his mentor. They spend many hours in Forrester's dusty apartment laughing, learning, debating and dedicating themselves to the love that binds them - the written word. Forrester convinces Jamal to enter the school's writing contest, but their friendship and loyalty is tested when Jamal must face an accusation of plagiarism - alone.

David Lee Madison
as Kid in the Hall

Alex Trebek
as Himself
View All