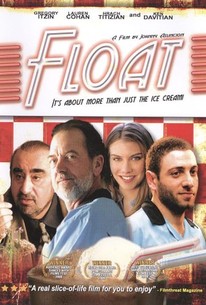 Separated from his wife of many years and left with no one to turn to for guidance or advice, the fifty-five year old owner of a small ice cream parlor moves in with his two bachelor employees, giving everyone involved the opportunity to reevaluate their lives and reassess their priorities. It's summer, and business at Ray Fulton's ice cream shop is booming. His slick manager Gevorg and his enthusiastic underling do their best to keep the business running as smooth as soft serve, yet a series of events are about to unfold that will show these three men just how unpredictable life can truly be. One afternoon, after Ramon gets into an altercation at work, Ray is forced to let him go. While Gevorg is kind enough to take Ramon in long enough for him to find a new job and get back on his feet, a second disaster follows in quick succession when Ray's long-time wife decides to file for separation seemingly out of the blue and for reasons the unsuspecting parlor owner can't fully understand. Recognizing another friend in need - and still with room to spare in his spacious home - Gevorg opens his doors to Ray as well. Later, just as the three men are beginning to settle into a comfortable routine, Ray's daughter Emily arrives in town on a mission to rescue her parents' relationship. But Ray is so wrapped up in his quest to rediscover his own identity that he doesn't seem to have much time for Emily, leaving her to form an unlikely bond with Gevorg that prompts the smooth-talking womanizer to take a second look at his rambunctious lifestyle. Meanwhile, Ramon considers entering into a potentially profitable marriage of convenience with Armenian beauty Susannah who's looking to get a green card, but finds the situation complicated after recognizing that he has better chemistry with her best friend Tami.

Anais Thomassian
as Tami
View All

There are no critic reviews yet for Float. Keep checking Rotten Tomatoes for updates!

There are no featured audience reviews for Float at this time.