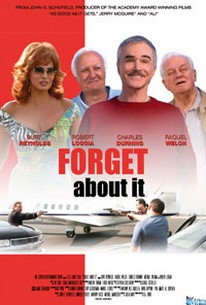 Forget About It Ratings & Reviews Explanation

Forget About It Photos

Burt Reynolds, Robert Loggia, and Charles Durning star in this crime comedy following three retired war veterans who stumble upon $4million in stolen mob money and quickly find themselves targeted by both the Mafia and the Feds. Sam (Reynolds), Carl (Loggia), and Eddie (Durning) have all managed to survive their turbulent tours of duty, and now all they want is to settle down and enjoy their retirement in the desert paradise of Sunrise Park - located just outside of Phoenix, AZ. Up until now, the biggest concern for these three friends was who would wind up winning the affections of their sultry neighbor, a former Las Vegas showgirl named Christine (Raquel Welch). The stakes get more than a little higher, however, when the Witness Protection Program drops mob-informant Angelo Nitti in their midst. Having recently turned evidence on some of the most dangerous underworld heavies around, Angelo has been given a new name and a new home in Sunrise Park. But despite the fact that he's come clean about his criminal life, Angelo still harbors a whopper of a secret: He's quietly stashed $4million in stolen mob money, and he's planning on spending the rest of his days in style. His plan hits a hitch, however, when his three neighbors discover the loot and head out on a wild spending spree. Now, as Angelo's secret spreads among both the underworld and the authorities, unsuspecting trio Sam, Carl, and Eddie soon find themselves pursued by trigger-happy treasure hunters on both sides of the law.

Critic Reviews for Forget About It

Audience Reviews for Forget About It

There are no featured audience reviews for Forget About It at this time.

Forget About It Quotes