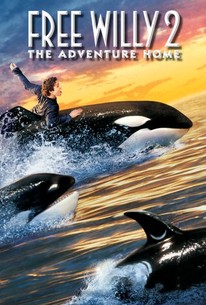 Two unlikely friends -- a boy and a killer whale -- are reunited under potentially dangerous circumstances in this sequel to the successful family adventure Free Willy. Jesse (Jason James Richter) has finally found stability and contentment with his foster parents Glen and Annie Greenwood (Michael Madsen and Jayne Atkinson), but he is confronted with a new emotional challenge when his birth mother (a drug addict who abandoned him when he was young) dies, and his troubled half brother Elvis (Francis Capra) comes to live with the Greenwoods. Jesse also deals with new feelings when he develops a serious crush on Nadine (Mary Kate Schellhardt), the goddaughter of Randolph (August Schellenberg), an animal trainer at the theme park where Jesse helps out. But a much bigger problem is on the horizon when the safety of Willy, the killer whale he befriended and helped return to the wild, is threatened. An oil spill spoils the ocean environment where Willy and his family now live, and an unscrupulous owner of an oceanarium, Wilcox (M. Emmet Walsh), attempts to capture Willie and put him back into captivity as a performing attraction. While Free Willy featured Keiko, a trained whale who (ironically) was living in captivity when the film was shot, Free Willy 2: The Adventure Home instead utilized mechanical models and digital animation to bring "Willy" to life. ~ Mark Deming, Rovi

Joan Lunden
as Herself
View All