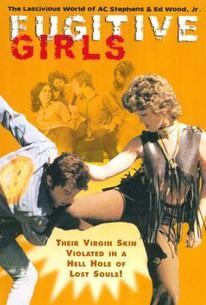 Five desperate women break out of a minimum security institution and search for a hidden stash of stolen loot in this adults-only feature written by cult favorite Edward D. Wood Jr. Dee (Margie Lanier) has been framed by her boyfriend, and is innocent of the liquor store holdup and murder that led to her conviction. When she overhears four of her fellow prisoners discussing a jailbreak, they force her to come along to keep her from squealing. They plan to make it to a secret hiding place where Toni (Renee Bond) is keeping nearly half a million in embezzled funds, then split the dough and live on easy street. The girls bribe a guard and head out to the Californian wilderness, where they run into a group of camping hippies. The drop-outs give them wine, shelter, and new clothes, but the escapees rudely insult the health food breakfast they've been served and disparage their "filthy freak" hosts, leading to a fight which the girls easily win. Next, they stop a passing motorist and steal his car, though not before stripping, raping, and beating the unlucky man. When the vehicle runs out of gas, the girls attack a lonely air strip caretaker (screenwriter Wood in a cameo role) and secure fuel from his pumps. The tables are turned on the desperate ladies when they invade a farmhouse and torment a crippled Vietnam vet and his wife, and when the sheriff (also played by Wood) arrives, Dee learns that the charges against her have been cleared. Fugitive Girls has also surfaced (with varying degrees of explicitness) as Five Loose Women, Hot on Their Trail and Women's Penitentiary VIII.

There are no featured audience reviews for Fugitive Girls at this time.