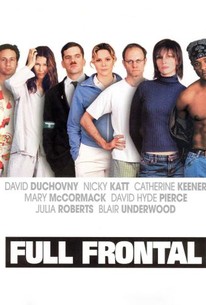 An confusing movie made worse by the poor camera work.

Described as a modern-day Hollywood version of Day for Night, director Steven Soderbergh's first digital video production was also shot employing a modified version of the frills-free Dogma 95 rules set forth by Lars Von Trier and Thomas Vinterberg, allowing a relatively small budget of about two million dollars. Julia Roberts and Blair Underwood star, respectively, as Francesca and Calvin, actors performing in a motion picture directed by David Fincher and co-starring Brad Pitt (who play themselves). Woven in and out of the film production story thread are several other subplots including one about a lovelorn woman, Linda (Mary McCormack); the self-absorbed Gus (David Duchovny); and a husband, Carl (David Hyde Pierce), whose wife (Catherine Keener) is falling for Calvin. Described initially as a follow-up to Soderbergh's independent breakout hit, sex, lies and videotape, Full Frontal isn't a sequel in the strictest sense of the word and is only thematically related to the earlier film in its exploration of voyeurism and sexuality. The film also stars Brad Rowe, Enrico Colantoni, and Nicky Katt.

Nancy Lenehan
as Woman on Plane

Brad Pitt
as Himself

Terence Stamp
as Himself (uncredited)

Harvey Weinstein
as Himself (uncredited)
View All