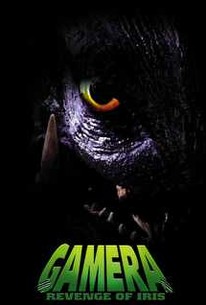 Daei studio's answer to Toho's wildly popular Godzilla, Gamera -- a monstrous fire-breathing turtle -- appeared numerous films from 1966 until 1971. In 1995, he made his triumphant return with Gamera Daikaiju Kuchu Kessen (Gamera: The Guardian of the Universe) which featured slick new special effects, a smart script by Kazunori Ito, and sharp direction by Shusuke Kaneko. Gamera 3 opens with scientist Mayumi Nagamine (Shinobu Nakayama) finding the corpse of a Gyaos in a remote Fillipino village. Cut to teenage girl Ayana (Ai Maeda), who is forced to live with her relatives in a rural village near Nara after Gamera killed her parents. One day, a gang of bullying classmates forces her to venture into a cave that supposedly houses a demon. Instead, she finds a rock that lights up at her touch. Later, a tentacled baby beast emerges from an adjacent egg; Ayana cares for it and names it after her dead pet cat, Iris. This, she surmises, could be her means of vengeance against Gamera. Meanwhile in Tokyo, Mayumi attends a meeting of the Monster Damage Control Committee. There she meets the creepy government astrologer Mito Asakita (Senri Yamasaki) and her simpering colleague, an extraordinarily creepy game designer (Toru Tezuka). Just as the meeting is about to commence, a Gyaos attacks Tokyo with Gamera in hot pursuit. Soon, a train station is blown up, glitzy buildings are trashed, and Gamera is dubbed enemy number one by the government. Back in Nara, Ayana finds the desiccated shells of animal as her pet monster has grown to the size of a house. Yet in order for it to reach its full strength, it fuses with its adoptive mother in a manner that is incredibly slimy. Later, Asagi Kusanagi (played by Steven Seagal's daughter Ayako Fujitani) -- the protagonist in the previous two Gamera films -- returns from studying abroad to help Mayumi and Gamera thwart this new villain, Iris. This film was screened at the 1999 Toronto Film Festival. ~ Jonathan Crow, Rovi