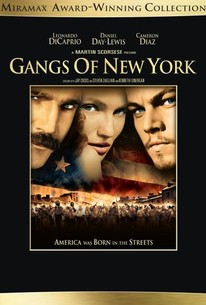 Though flawed, the sprawling, messy Gangs of New York is redeemed by impressive production design and Day-Lewis's electrifying performance.

The violent rise of gangland power in New York City at a time of massive political corruption and the city's evolution into a cultural melting pot set the stage for this lavish historical epic, which director Martin Scorsese finally brought to the screen almost 30 years after he first began to plan the project. In 1846, as waves of Irish immigrants poured into the New York neighborhood of Five Points, a number of citizens of British and Dutch heritage who were born in the United States began making an open display of their resentment toward the new arrivals. William Cutting (Daniel Day-Lewis), better known as "Bill the Butcher" for his deadly skill with a knife, bands his fellow "Native Americans" into a gang to take on the Irish immigrants; the immigrants in turn form a gang of their own, "The Dead Rabbits," organized by Priest Vallon (Liam Neeson). After an especially bloody clash between the Natives and the Rabbits leaves Vallon dead, his son goes missing; the boy ends up in a brutal reform school before returning to the Five Points in 1862 as Amsterdam (Leonardo DiCaprio). Now a strapping adult who has learned how to fight, Amsterdam has come to seek vengeance against Bill the Butcher, whose underworld control of the Five Points through violence and intimidation dovetails with the open corruption of New York politician "Boss" Tweed (Jim Broadbent). Amsterdam gradually penetrates Bill the Butcher's inner circle, and he soon becomes his trusted assistant. Amsterdam also finds himself falling for Jenny Everdeane (Cameron Diaz), a beautiful but street-smart thief who was once involved with Bill. Amsterdam is learning a great deal from Bill, but before he can turn the tables on the man who killed his father, Amsterdam's true identity is exposed, even though he has concealed it from nearly everyone, including Jenny. Gangs Of New York was the first film in two years from actor Leonardo DiCaprio; ironically, it was at one time scheduled to open on the same day as Catch Me if You Can, the Steven Spielberg project that DiCaprio began filming immediately after Gangs wrapped. ~ Mark Deming, Rovi