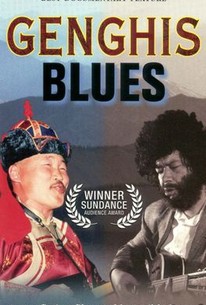 At once whimsical and profound, Genghis Blues chronicles the journey of blind blues legend Paul Pena as he discovers the ancient art of Tuvan throat singing and participates in the national competition. Belic's brand of freestyle filmmaking brings an infectious energy to this documentary, which is both a powerful, personal portrait of a musician and the story of a unique cultural exchange. It all started with a 1977 dinner conversation in which renowned physicist Richard Feynman challenged his friend Ralph Leighton to find Tuva on the map. There it was, wedged between Siberia and Mongolia, and soon the two men became the first Americans to travel to Tuva. They eventually paved the way for the country's most famous singer, Kongar-ol Ondar, to perform in the United States. At about the same time, Paul Pena was scanning his shortwave radio and stumbled upon one of Ondar's songs. Fascinated, he spent the next decade teaching himself the techniques by which a singer can produce up to four notes simultaneously. Serendipity brought Pena to Ondar's stateside performance, and two years later, Pena and an eclectic group of filmmakers and musicians made a remarkable journey to Tuva. Where Pena suffers personal injustice from being black and disabled at home, he experiences overwhelming acceptance, respect, and admiration in Tuva. Belic's playfully earnest camera captures Pena's excitement as he travels through the country, experiencing the drama of competition, witnessing spectacular performances, and astounding audiences with his musical ability. Genghis Blues is a testament to the transformative powers of music.