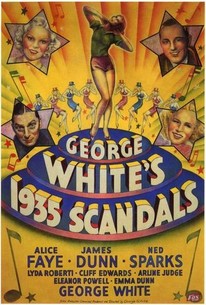 Broadway producer George White, who was the title character of 1934's George White's Scandals, heads for Florida following his latest hit. He makes it to Georgia where he sees an advertisement for a show called White's Scandals. Suspicious, he attends and learns that it is a hodge-podge variety show put on by another fellow named White. The show isn't very good but for the talent of its star, a beautiful singer. He is deeply impressed and hires her to headline his next show in New York. Well, just having only one of the entertainers come just won't do and George ends up taking an entire entourage including the Georgia White and the singer's love-interest. Still it's for the best and the New York production is a tremendous success. Things go well until a seductress shows up and steals the singer's beau. This creates personal friction that reflects in their performances. Things get sticky for awhile and it looks as if the show is going to fall apart until the singer's peach of an aunt shows up and puts it all back together. Eleanor Powell makes her screen debut as the troublesome vamp.

Marbeth Wright
as Jean / One of Do's four Girls

Florine Dickson
as One of Do's Four Girls

Kay Hughes
as One of Do's Four Girls

Mildred Morris
as One of Do's Four Girls
View All

There are no featured audience reviews for George White's 1935 Scandals at this time.