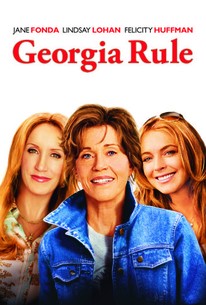 Comedic and dramatic in all the wrong places, Georgia Rule is a confused dramedy that wastes the talents of its fine cast.

Jane Fonda, Felicity Huffman, and Lindsay Lohan star in director Garry Marshall's tale of a rebellious young woman who is sent to spend the summer with her grandmother when her frustrated mother fails to find a means of curbing her unruly behavior. Rachel (Lohan) is an out-of-control teen whose reckless drinking, foul mouth, and hysterical fits have become a constant source of embarrassment for her long-suffering mother, Lily (Huffman). When Rachel crashes her car, Lily determines that the only way to tame her savage daughter is to take her as far away from San Francisco as possible. Though Lily had once sworn never to return to the Idaho farm presided over by her demanding mother, Georgia (Jane Fonda), desperation has a funny way of dulling the pains of the past, and it's not long before Lily is packing Rachel in the car and setting out for potato country. Contrary to the common image of the sweet and doting grandmother, Georgia is a stern matriarch whose beliefs in the power of God and a hard day's work stand in stark contrast to the carefree lifestyle of the tempestuous Rachel. An interesting thing happens as the summer wears on, though; despite her initial efforts to disrupt the quiet Mormon community, Rachel's rage is gradually tempered as she learns the value of structure and responsibility. Later, as Rachel's protective walls begin to crumble and she begins to embrace compassion and kindness, the doors are opened for three generations of family to confront the long-buried secrets of their past and finally move forward in the healing process.

Cynthia Ferrer
as Townie No. 2

Cat Stock
as Girl with Rabbit

Fred Applegate
as Townie No. 1
View All