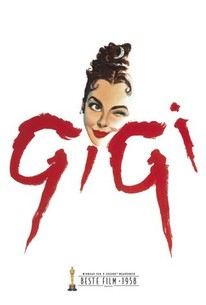 It may not be one of Vincente Minnelli's best, but the charming and flawlessly acted Gigi still offers enough visual and musical treats to satisfy.

Leslie Caron plays Gigi, a young girl raised by two veteran Parisian courtesans (Hermione Gingold and Isabel Jeans) to be the mistress of wealthy young Gaston (Louis Jourdan). When Gaston falls in love with Gigi and asks her to be his wife, Jeans is appalled: never has anyone in their family ever stooped to anything so bourgeois as marriage! Weaving in and out of the story is Maurice Chevalier as an aging boulevardier who, years earlier, had been in love with Gingold's character. Chevalier gets most of the best Lerner & Loewe tunes, including Thank Heaven for Little Girls, I'm Glad I'm Not Young Any More, and his matchless duet with Gingold, I Remember it Well. Caron's best number (dubbed by Betty Wand) is The Night They Invented Champagne while Jourdan gets the honor of introducing the title song. Filmed on location in Paris, Gigi won several Oscars, including Best Picture; it also represented the successful American movie comeback of Chevalier, who thanks to this film was "forgiven" for his reputed collaboration with the Nazis during World War II. ~ Hal Erickson, Rovi

Edwin Jerome
as Charles the Butler

Jack Trevan
as Coachman
View All