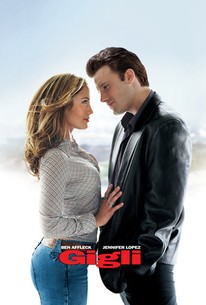 Bizarre and clumsily plotted, Gigli is a mess. As for its stars, Affleck and Lopez lack chemistry.

Larry Gigli, a lowly hit man in Los Angeles, who is looking to finally score big, lands the perfect "job"--or so he thinks. He is assigned to kidnap Brian, the psychologically challenged younger brother of a powerful federal prosecutor, in order to save his mobster boss from incarceration. Holed-up in his one-bedroom apartment with his kidnap victim Brian, Gigli starts to realize that what he thought would be a routine assignment has become a daunting and unwieldy task. Ricki, a beautiful, independent-minded female gangster, is sent to assist Gigli with the kidnapping--as his boss doesn't have faith that Gigli can carry out the job on his own. But when his feelings for the elusive Ricki begin to grow, and he becomes genuinely concerned for the vulnerable Brian, tough guy Gigli begins to trade in his tough exterior, for a more human, sensitive one--and considering his profession, that could be quite a dangerous path to follow.

Terry Camilleri
as Man in Dryer

Terrance Camilleri
as Man in Dryer

Robert Silver
as Man in Debt

The 10 Most Unintentionally Unsexy Sex Scenes in the Movies
50 Worst Summer Movies of All Time
Total Recall: Ben (Affleck’s) Bits
View All