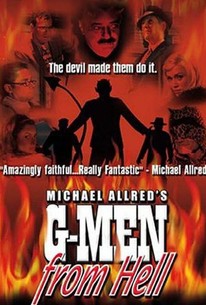 Two bad cops rise from the grave in an attempt to go straight in this offbeat comedy. Mike Mattress (Tate Donovan) and Dean Crept (William Forsythe) are a pair of stone-faced FBI agents who are not above stretching the law to their advantage; their double dealings lead to their fiery death in a booby-trapped car, and the two agents find themselves descending into Hell. After a disturbing run-in with Satan (Robert Goulet), Mattress and Crept escape and find their way back to Earth, where they hope to perform some good deeds that might allow them to escape damnation. Starting over as private eyes, Mattress and Crept are hired by millionaire Greydon Lake (Barry Newman), who believes his wife Gloria (Vanessa Angel) has been unfaithful to him. Gloria soon turns the tables by hiring the two gumshoes away from her husband, but things take a sinister turn when Greydon turns up dead. While tracking down leads in Greydon's murder, Mattress and Crept discover he was financing research by the eccentric Dr. Boifford (David Huddleston), whose bizarre talents come in handy when Buster (Bobcat Goldthwait), a leg man for the detectives, is killed while doing research; Boifford is able to transplant his brain into the body of a robot. Meanwhile, Buster's accident attracts the attention of the police, as well as FBI agents Dalton (Zach Galligan) and Langdon (Gary Busey), who are hot on the heels of the formerly dead lawmen. G-Men From Hell is based on characters from the comic book Grafik Musik, created by Michael Allred.

Kari Wuhrer
as Marete
View All

Critic Reviews for G-Men From Hell

There are no critic reviews yet for G-Men From Hell. Keep checking Rotten Tomatoes for updates!

Audience Reviews for G-Men From Hell

There are no featured audience reviews for G-Men From Hell at this time.