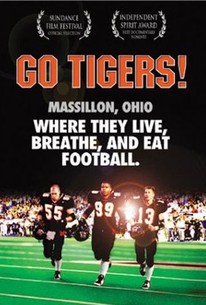 Go Tigers! is both an absorbing and evenhanded documentary, a perceptive look into the world of high school sports and its impact on a community.

A first-hand account of young athletes in the high school football-obsessed town of Massillon, OH, this first feature by director Kenneth A. Carlson was shot on high-definition video over the course of the 1999 football season of the Massillon Tigers. At the beginning of the season, the team is nursing a "four-and-six nightmare season" and want to redeem themselves. Meanwhile, school officials attempt to raise funds though a tax levy after defeats at the polls, but if the levy is rejected again, it may mean unemployment for much of the school personnel, including the coaches. In retaliation, the players assume a winning season which puts extra pressure on them to earn scholarships and work much harder than a standard season. Among the handful of players depicted are Ellery Moore, a black defensive end with high ambitions to get out of his small town, especially after it is revealed that he has a shady past which may have included sexual assault. The film also candidly looks at the players off the field, as they drink and taunt fellow classmates who believe that the town has a misplaced sense of priorities.

Ellery Moore
as Himself