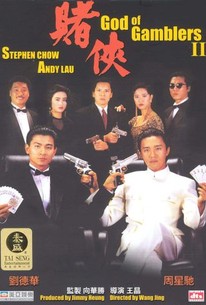 At one time there was a special genre of Hong Kong entertainment films which focused on gamblers and their like. In 1989, that genre was decisively revived thanks to the very successful release God of Gamblers. In that earlier film, among his other accomplishments, the master gambler played by Chow Yun Fat managed to pass on many of his skills and abilities to a younger associate, played by Andy Lau. In this one, Lau's character, now a master gambler in his own right, is being pestered by a young man (Stephen Chow) with intermittently available psychokinetic powers (the ability to move objects with the mind). However, not only is that ability only available to the boy when he's in love, but there's a lot more to the gambling business than the ability to cheat occasionally. They get into enough trouble to keep the story moving briskly, and this comic action film did well enough to warrant a sequel.

Stephen Chow
as Chow Sing Cho / 'The Saint of Gamblers'

Or Sau Leung
as Black Panther

There are no critic reviews yet for God of Gamblers II. Keep checking Rotten Tomatoes for updates!