Godzilla, King of the Monsters! 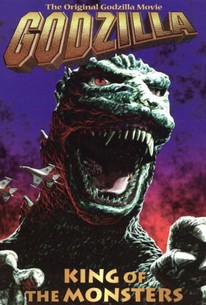 Godzilla, King of the Monsters!

Godzilla, King of the Monsters! Photos

Filmed in 1954 as Gojira, this grandaddy of all Japanese giant-reptile epics was picked up for American distribution two years later, at which time several newly filmed inserts, featuring Raymond Burr as reporter Steve Martin, were rabetted into the original footage. In both the Japanese and American versions of Godzilla, the story is basically the same: a 400-foot amphibious monster, brought back to life by underwater nuclear testing, goes on a rampage in a tinker-toy Tokyo. The authorities look on in vain as Godzilla proves more powerful than the army, navy, and air force, while paleontologiist Dr. Yemane (Takashi Shimura) rails against the destruction of a unique scientific find such as Godzilla. Finally, an enigmatic scientist (Akihiko Hirata) reluctantly steps forward to destroy the beast with his newly-discovered creation, the Oxygen Destroyer, dreading all the while that his weapon may unleash a danger even greater than Godzilla. Though Godzilla is apparently disintegrated in the climax, this didn't prevent Toho Studios from grinding out an endless series of sequels with the title character becoming less destructive and more lovable with each subsequent film. Hampered by a low budget which precluded stop-motion animation, special-effects wizard Eiji Tsuburaya was forced to rely upon an actor (Haru Nakajima) in a rubber Godzilla suit. Incidentally, the name "Gojira", a combination of "gorilla" and "kujira", is Japanese slang for "big clumsy ox" and was allegedly the nickname of one of the Toho stagehands.

Kenji Sahara
as Man aboard Ship

Haruo Nakajima
as Godzilla/Newspaperman
View All

News & Interviews for Godzilla, King of the Monsters!

Critic Reviews for Godzilla, King of the Monsters!

Audience Reviews for Godzilla, King of the Monsters!

Godzilla, King of the Monsters! Quotes