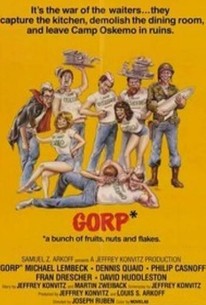 Chaos reigns in the Catskills in this low-budget teen comedy. Kavell (Michael Lembeck) and Bergman (Philip Casnoff) are college students who spend their summers working in the dining hall at Camp Oskemo, an upstate New York summer camp where they're the senior waiters. Serving food to bratty children doesn't interest them nearly as much as trying to make time with the female counselors at the camp, among them pretty but chaste Vicki (Lisa Shure) and attractive but significantly less virginal Evie (Fran Drescher). Kavell and Bergman also wage an annual war against the junior waiters with the help of deranged server Grossman (Dennis Quaid), but their real nemesis is Wallman (David Huddleston), the owner of the camp who makes no secret of his dislike for the waiters. Over the course of one eventful summer, Kavell, Bergman and their fellow food slingers dose the entire camp with amphetamines, taint the Kosher meals with pork, screen pornographic movies during Parent's Weekend, run a tank through the campgrounds and destroy the waiter's housing and most of what surrounds it. Hilarity, or something like it, ensues. While seemingly influenced by Meatballs, Gorp was actually shot at roughly the same time as Bill Murray's summer camp vehicle, though it was released nine months later. Director Joe Ruben later went on to better things, including True Believer, Sleeping With The Enemy and The Forgotten.

Julius Harris
as Fred the Chef